OPPORTUNITY: Poor boom hygiene can have a devastating effect on your spray application. One of the most common issues caused by poor boom hygiene is cross-contamination. This occurs when small particles of chemical start to build up inside the boom, often in the dead-end spaces after the last nozzle body on each section . These particles can be picked up and applied to a field during the next application made by that sprayer or even several applications later. You will often recognize this issue in the form of streaks or a v-shaped pattern of injury where you started spraying a field. Cross contamination is becoming an even larger issue with the introduction of new, more potent formulations.

Solution: Eliminate the dead-ends on your spray boom where chemical particles can build up. By installing Hypro’s Express End Cap, you can remove up to 6 inches of dead-ends from each end of a section. On a seven section boom, you can eliminate up to 7 feet of space where chemicals can build up!
The Express End Cap also includes a removable plug allowing you to flush your boom free of chemicals like Dicamba in under 30 seconds (after plug is removed). Now that is good boom hygiene!

Watch the video below to see why cleaning out your spray boom is crucial. 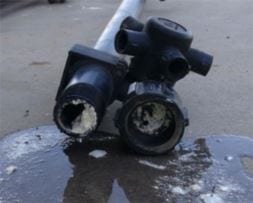