The control of hard to kill and highly invasive weeds such as Parramatta grass, tussocks and fireweed has just become a lot easier with the release of the Winged Eliminator weed wiper from C-Dax. The Winged Eliminator has been developed based on farmers demand for a larger wiper with the capability of working on even the most undulating properties.
The Winged Eliminator is 4.3 m in width and incorporates pivoting end wings. The end wings follow land contours to maintain the correct wiping height.
East Gresford grazier, Russell Brown has used an Eliminator for 2 years controlling Parramatta Grass on his Hunter Valley property “Glenthorne.” “While I was a little dubious at the start, I was amazed with the results from using the Eliminator,” Mr Brown said. “Fireweed and Parramatta grass have been slowly swallowing up some of my best country, however, in some cases I got more than 95 per cent control with the Eliminator.”

Mr Brown has upgraded to a Winged Eliminator this season “The Winged Eliminator with its 4.3m span covers nearly twice as much country as my existing Eliminator” said Mr Brown. “The pivoting wings enable me to control weeds on steep drop offs and hard to access areas such as contour banks and drains”

C-Dax spokesman John Hunt said that the Eliminator and Winged Eliminator incorporate a number of features ideal for controlling a range of noxious and declared weeds. “The C-Dax Eliminator applies herbicides such as glyphosate only onto the target weeds, avoiding pasture damage and the need for broadacre spraying” he said. “The wiping action of the unit avoids any risk of drift so windy days no longer become a limiting factor to controlling weeds on time” added Mr Hunt.

An integrated electronic controller supplied with the Eliminator gives the operator the ability to precisely meter the output of the wiper relative to the level of weed infestation and pressurizes the system to supply an equal amount of chemical to both sides of the wiper, irrespective of the angle of operation.

Mr Hunt added “Other wipers are notorious for dripping on the downhill side, while being bone dry on the high end. Eliminator, however, has a patented feed system that ensures both sides are fed equally on even the roughest terrain.” 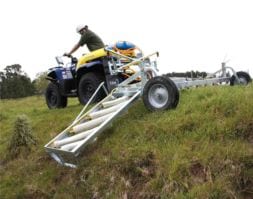